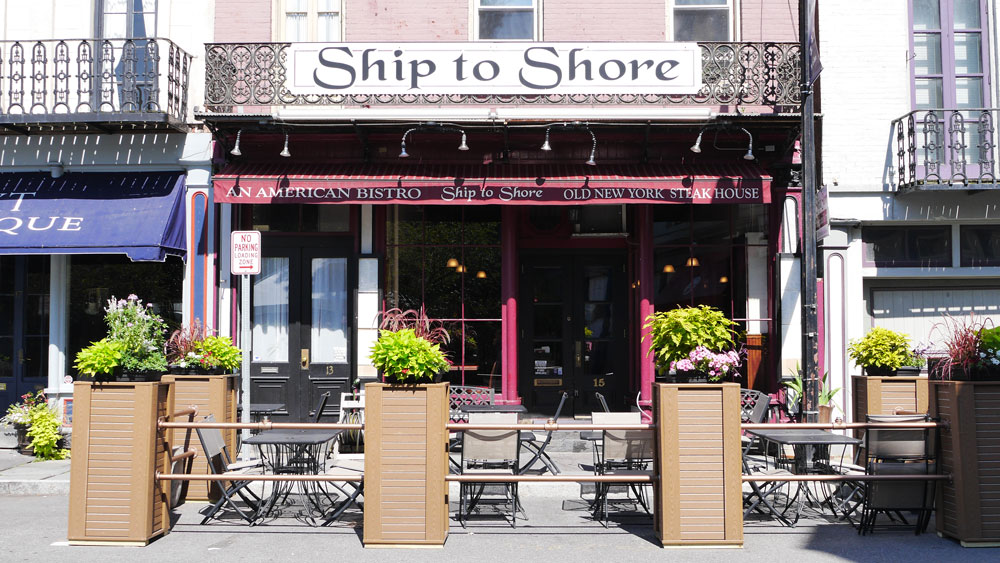 In this Petulant Pairings conversation, I had the pleasure of visiting with Chef Samir Hrichi the Chef/Owner of the legendary Ship to Shore, an American Bistro in scenic Kingston, New York, on the Hudson River, along with the restaurant’s General Manager, Mr. Shane McDermott.

When I clicked to join our call I was quite surprised to see my illustrious guests seated together in the closed quarters of the diminutive chef’s office! My surprise however quickly turned to that type of privilege or shared intimacy that you might feel seeing what it looks like backstage after you’ve enjoyed stunning performances in the front-of-the-house of a beautiful theatre. The wee office was the only quiet place in the restaurant as the crew was getting ready for service while we talked.
Every chef has a story about how he or she became passionate about cooking. Chef Samir’s love for cooking comes from deep family flavour roots, having parents and grandparents who were all great cooks. He spoke of growing up “with an interesting refrigerator” – coming from Latvian and Moroccan parents!

When it came to discussing a petulant pairing, I could feel my heart rate quicken with the crescendo of Chef Samir’s passionate description of his new dish. With the detailed explanation of each element, from the crisped skin of the barramundi fish to the fresh peach pico de gallo, Chef sat up in his chair a little straighter then moved closer to its edge, the pace of his voice increased and then the unexpected petulant pairing arrived like an eruption of the volcano of creativity that is Chef Samir.

We also got to hear what exciting new ideas the General Manager, Shane McDermott has in mind for this iconic destination. In a poetic closing of a circle, his career started at Ship over 20 years ago, then took him to top dining rooms (including Michelin-starred rooms) in California, and now finds him back at Ship, as its General Manager. Shane looks forward to bringing exciting and eclectic surprises to Ship to Shore’s wine list with the intent of offering guests the opportunity to experience new pairings and discover grapes they didn’t know they loved from countries they perhaps didn’t know made great wine! With the combined talent and passion, the historic synergy and fraternal bond that Mr. McDermott shares with Chef Samir, I’m certain they’ll create nothing less than culinary fireworks together!The talented team at Ship to Shore has been delighting guests for over 22 years and it’s is one of the most popular eateries in the Hudson Valley. in upstate New York. The majority of weekend dinner reservations are made by avid foodies who drive up from New York City to experience Ship to Shore and Chef Samir’s creations.

Chef Samir Hrichi is a CIA (Culinary Institute of America) trained chef and has taught at the CIA as a guest chef. He’s a deeply dedicated father of three as he leads the innovation at Ship, setting trends and celebrating the ever-popular Hudson Valley Farm-to-Table culture. Check out the website to see some of the many awards Ship to Shore has won. They have also been interviewed and reviewed by many top food and wine publications.

…we all know what they say about “rules” – sometimes they’re better off bent!
What is a “Petulant Pairing”?
This is an expression that came to mind when I was thinking about unorthodox match-ups, pairings that may not be considered “proper pairings” to some because they don’t adhere to the traditional rules for pairing food with wine, or because they’re new.

Most often those pairing “rules” came to be because of common sense. For example, white wine with fish because many types of fish are quite light and you don’t want a powerful and magnificent Barolo walloping it beyond recognition at dinner!

We can use a pairing approach that highlights similarities in aroma, texture or spiciness (an earthy mushroom dish with an earthy wine like pinot noir). Another approach highlights the harmony of opposites (salty or spicy Asian food with an off-dry gewürztraminer). Then we have a regional pairing phenomenon where local food is simply eaten with its local wines “what grows together goes together” (a hearty beef brasato with the above-mentioned magnificent Barolo).

So, just as “official” wine pairing norms can be varied, we can encourage our tasting room guests to experiment with an open mind and guide them to listen to what their senses are telling them. Hopefully, this will make your guests feel more at ease, and trust you as their guide to discovering what’s good – for them. Ideally, a good pairing (at the table and in life!) celebrates both elements. But you can stretch those rules and still really enjoy your meal.

With this series showcasing Petulant Pairings we aim to encourage an open-minded and adventurous approach to food and beverage pairing.

That’s precisely the foundation of Beyond the Wine:
Specialized training programs that coach tasting room ambassadors to make their visitors feel comfortable and at ease.
Teaching guests to trust their unique palates, free of intimidation or hesitation.
Guiding guests through the amazing experience of your wonderful wines!

Please reach out if you have a Petulant Pairing to share or if you’d like to talk about how we create tasting room rockstars that will turn your guests into enthusiastic fans and engaged, loyal members of your winery family.